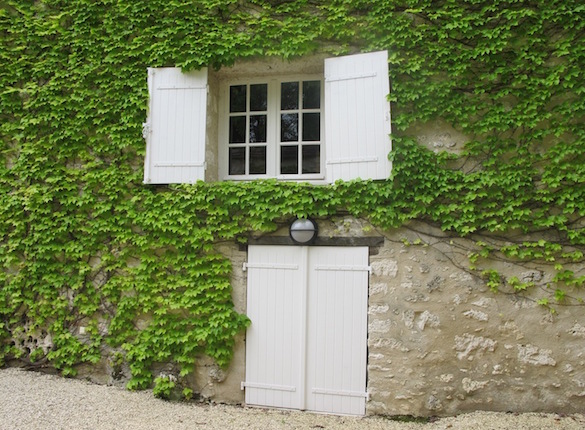 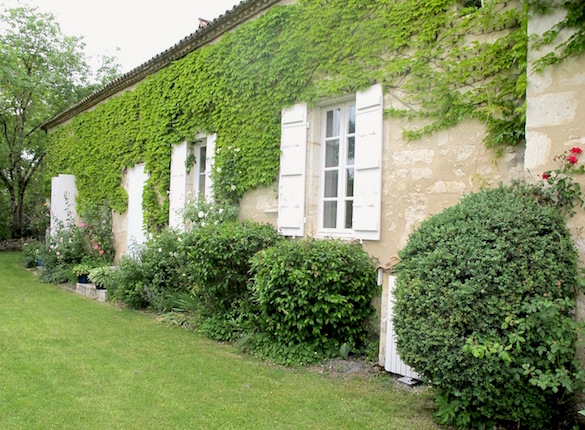 A country house in France – and garden

I have a friend who lives in France and she and her husband owned a beautiful, old, stone house in the Lot in south west France which they have just sold. I visited twice and each time the house, the plants and the countryside left me enchanted. It is, of course, in a very good red wine area and the food and wine and general hospitality we were given were superb.

The house is built of pale stone with a terra cotta tiled roof typical of the region and white wooden shutters on all windows. I was there is early spring both times and the vivid green of the Boston ivy (Parthenocissus tricuspidata) was in stark contrast to the lovely pale stone. The informal garden in the front of the house, which is clothed in wisteria early in spring, is terraced down to the front field. A judas tree (Cercis canadensis) was just coming into flower on the first visit.

There is a long front lawn on the upper terrace which is used for outdoor meals and entertaining in summer and onto which some of the bedrooms open. They have deep snow in winter, so life is indoors during those months.

When the wooden shutters were open, you could look through the sitting room, which had a huge open fire place, to the garden terrace beyond.

This is a view from the upstairs guest bedroom early in the morning when the mist was rising. From here you could look down to the field in front of the house with the boomerang-shaped pond. (My friend, after all, was Australian.) When the grass was mown in this area the patch where a hare was raising her leverets was left long, so she could bring up her young in peace. They owned a small wood along the far boundary of this field.

In the lower field a magnificent pink horse chestnut (Aesculus hippocastanum) was in bloom.

A pigeonnier was part of the complex of buildings surrounding the country house and it had been converted into a spacious office and living accommodation for guests. To the side was a gravel courtyard accessed through a covered gate with Boston ivy hanging down from under the tiled roof at the entrance and covering the walls of the pigeonnier.

When we were visiting in May a vivid clematis was in bloom, growing through the Boston ivy. The perennial monarda was also in flower. My friend found this a very useful and hardy perennial as it spread throughout the garden and had the most glorious two-tone purple flowers.

There was a local golf course in the area and an impressive pigeonnier has been restored. The small chateau in the grounds is now used as accommodation for the golfers some of whom arrived by helicopter while we were having lunch.

One day we visited the nearby town of Bergerac on the River Dordogne, famous for the character, Cyrano de Bergerac, of which there were numerous statues in the squares and pretty gardens for which the town well known. There are many medieval buildings which have been authentically restored in this historic and attractive town and one we visited was the 16th century Couvent de Récollects which is now an information centre about local wine and where art exhibitions are held in the Cloisters and concerts in the evenings.

A garden designer in Sydney for over 20 years, Margaret designs the gardens, hand draws the plans, procures the plants and supervises the job from start to finish. Margaret has also written articles for garden magazines, including Outdoor Rooms. She is now focusing on water-colouring garden plans, as some clients still want a hand-drawn plan of their garden as a keepsake and this can be greatly enhanced by being water-coloured. She has been commissioned by Readers Digest to design and water colour a plan for a formal herb garden and this is now featured in their book, The Complete Book of Herbs.