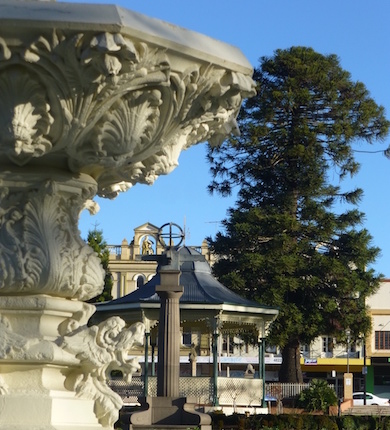 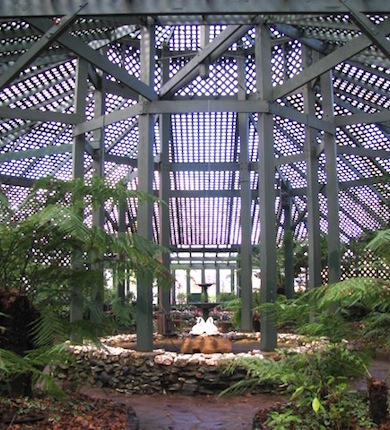 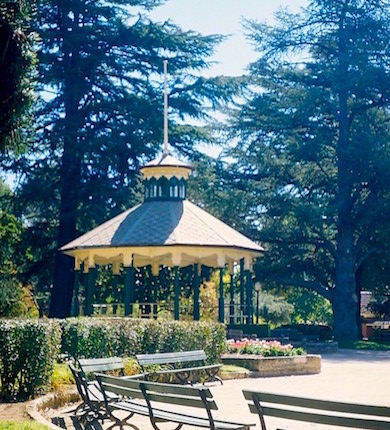 Almost off the radar in terms of heritage listings at state or national level, yet uppermost in local communities’ minds and affections and emblems of regional pride as meeting places, beauty spots and centres for social or important gatherings, local public parks across NSW are one of its glories. A handful of the hundreds spring to my mind as my favourite places, historic, beautiful, rich in detail (be that layout, embellishment, plantings) and well-loved and used to this day.

Examples outside Sydney include one in the heart of Goulburn in the Southern Tablelands, Belmore Park, and three in the ‘Central West’, (all designed by the same man, Andrew Alfred Patterson, a Swedish-Australian): Cook Park in Orange, Machattie Park in Bathurst and Cameron Park in Wellington, bear his stamp and are, I think, the pride of each town. Locals certainly seem to use them regularly, with enthusiasm. I recall a crowded Cook Park on Australia Day and an equally crowded Belmore Park for a multicultural festival not long ago. I make a bee line for each of these should I go to (or through) these towns, why not? Strategically located downtown (with diverse shopping distractions) or on the main road through in Cook Park’s place (Robertson Park in downtown Orange fulfils a complementary role and is almost as good as Cook Park).

Belmore Park was Goulburn’s central Market Square, part of the plan laid out by Robert Hoddle in 1833. It was renamed Belmore Square in 1869 to honour Countess Belmore’s visit when her husband the Earl (NSW Governor) opened the Sydney-Goulburn railway. She planted the large oak (Quercus robur) that graces its centre. The town was singularly treeless then, partly through a lack of water, but with the park fenced and more trees planted, residents formed a league to plant street trees. The 1870s and 1880s were the town’s greatest period of expansion (‘on the sheep’s back, you might say).

Belmore Park is a Crown Reserve dedicated for ‘Botanic Gardens’ on 13/9/1899. It’s significant as a fine example of a mid-/High Victorian public park that makes an important contribution to the streetscape, with important relationships with buildings around it, notably the (splendid) Court House. It also has social significance as the city’s focus (e.g. annual Multicultural Festivals in February and Community Carols in December) and its monuments and mature trees are visually significant and demonstrate the taste of its period of creation.

The park has a chiefly axial layout along which most monuments are aligned. It was originally surrounded by a double row of English elms (many now gone). It is notable for magnificent mature trees. The use of exotics was favoured in the 19th century and it sports mature English (in fact, European) (Ulmus procera) and American elms (Ulmus americana), Bunya (Araucaria bidwillii) and hoop pines (Araucaria cunninghamii), Atlas cedar (Cedrus atlantica), English oak (Quercus robur) and golden ash (Fraxinus excelsior ‘Aurea’.

The park reached its present form in the 1880s, although earlier photos show more elaborate bedding with shrubs. Some replanting has occurred since the 1990s and the main Auburn Street frontage was re-worked in 1997, repaving and replacing original kerb, fence and steps. Memorial trees include 2 blue spruces (Picea pungens) and claret ash (Fraxinus oxycarpa‘Raywood’).

Andrew Alfred (A.A.) Patterson was born in Drottningholm, Sweden in c1859, trained in Uppsala University as a surveyor and gardener and aged 18 was lecturing at Hamburg University. He left for England, then Australia, worked on a Tasmanian railway and another in NSW, along with botanical collecting in Queensland. Following illness he worked for merchant James Dalton, at Duntryleague, Orange – itself an impressive 1870s mansion set in expansive, richly planted grounds (most now a golf course).

Through Dalton’s influence Patterson got the job of inaugural gardener at Cook Park in 1880. The park was proclaimed in 1873 and only saved from subdivision by the activism of local resident, John Templer. Subsequently Patterson was ‘head-hunted’ by nearby Bathurst Council to plant and lay out its Machattie Park in 1890-1 (some sources credit architect James Hine with this design) on the site of the town’s demolished first jail. Patterson would spend 20 years in Bathurst, writing regular newspaper articles and dispensing advice. The rest of his career was spent as Shire Engineer in Central NSW.

As such he advised on Wellington’s Cameron Park (first proclaimed in 1882 as Bell Park, after lobbying by the Wellington Improvement Society in 1859. Five acres was set aside between the winding Bell River and the town’s main street. The park was laid out in 1909-10 to Patterson’s design, based on a park in Edinburgh. It was renamed Cameron Park in 1910 to honour the Mayor, Ald.Thomas Cameron for his energetic work in establishing it. Patterson died in 1932).

What’s so special about these three?

Each has typical ingredients of ‘second wave’ Victorian era parks: formal or informal layout, wide and generous strolling paths, ample seats in shady spots (for people watching and just lulling), a band rotunda, sculptures and monuments such as World War 1 cannons and the like and formal gate ways, fences and railings. Cook andMachattie Parks both have onsite cottages for the gardener (of which I heartily approve!), a fernery (essential in a 19th century ‘craze’ for ferns), glasshouse / conservatory. Cameron Park has a striking war memorial, with sculpture by Marrickville sculptor Gilbert Doble (dedicated in 1933). All have water elements: a river, fountains, lakes and ponds, providing both interest, attraction for birds (local ducks, not least) and liveliness. Above all each has marvellous towering trees, giving welcome summer shade and cool – no doubt enjoying the generally rich volcanic (and other) soils of this part of NSW, ample moisture (not common in NSW) and careful care from Councils that seem to know these are their best assets and draw cards.

Their shrubs bring fragrance and flowers and privacy, cover for small birds and break up the large spaces into more intimate ‘rooms’, making you feel you’re not in a wide open field but nestled, at rest (or more likely to do so). They delight with changing seasonal displays, outlasting dazzling annual bedding plants and schemes, which while they’re obviously there to catch the eye, are fleeting at best. Give me a perfumed flowering winter honeysuckle (Lonicera fragrantissima), orange-fruited Mexican hawthorn (Crataegus mexicana) or cherry-red sun-tanned dwarf sacred bamboo (Nandina domestica ‘Nana’ any day! As do drifts of bulbs: seeing jonquils or daffodils pushing through leaves in late winter/early spring, drifts of bluebells (Endymion non-scripta) or sky flowers (Ipheion uniflora), beds of tulips or anemones in high spring bring cheer to the heart. Not pleasures restricted to the large country estate owner, surely?

Pleasingly all are listed local heritage items by their respective Councils. Why aren’t they listed on the NSW State Heritage Register? They’re arguably as or more important than many of the civic or commercial buildings surrounding them that are all long-listed as heritage items, some of these duly state-listed. But their equivalent, off-setting parks?

One might say that the ‘new world’ and colonies perhaps excelled their parent countries in both park provision, multitude and in some cases, magnificence. These three are a pretty good start to back up such claims, in my view.

NSW has had commons since 1803 under Governor King and public parks since 1810 when Governor Macquarie declared Hyde Park (named after London’s), our first. Swathes of park provision followed in the 1860s with and after the first wave of municipal and local government councils’ creation, then in the 1880s when park numbers really skyrocketed with more Councils and a centenary to celebrate and mark.

Lower numbers have been created in the early 20th century, slowing after World War 1. In recent decades old land fill and dump sites, former factory sites and redundant industrial lands have been made over into post-modern parks – a bold new wave. These are great and exciting, but often sparely furnished and planted – they don’t lift my spirits or excite quite as much as each of the three named above.

We don’t have much guidance on our parks – an excellent primer is a National Trust of Australia (NSW) booklet, Urban Parks of Heritage Significance – a collection of essays… (1993), available at the National Trust online shop.

Friend and colleague Warwick Mayne-Wilson self-published a great book in 2013, Town Parks of New South Wales – past, present and future which outlines the history of park creation, design, the fortunes and twists in their evolution. This is a most welcome book, surveying something mostly overlooked by others, yet so central to local and regional identity: gathering places for groups, families and whole communities on occasion. It’s available via his website.

Spencer Harvey has written a great history of Bathurst’s pride and joy, The Story of Machattie Park and the people who worked there (2006), which focuses on the personalities behind the park’s creation, design and evolution – a refreshing change from most such. He’s written other pieces on A.A.Patterson filling a welcome gap. It can be purchased by writing to the Bathurst & District Historical Society, P.O. Box 237 Bathurst 2795 – all proceeds go to that Society for future such projects.

Why don’t we care for, and notice these places more? We seem to take them so much for granted, and begrudge even basic budgets for maintenance. I look out onto tiny Beare Park, facing Elizabeth Bay in Sydney’s east. I’m happy to say it’s well maintained and fairly rich in features, unlike some. Every day, almost all day in cycles, singles or groups of people are in this space: doing exercises or fitness training, strolling along its esplanade gazing at the harbour, exercising, sun bathing, fishing, meeting for coffee and a chat, having picnics, walking dogs, launching canoes, smoking, making private phone calls, canoodling. It’s a delight to see people hungering for and enjoying open space, sun, shade, time out. Exactly what a local park should be hosting. And exactly what we the needy public fought for – parks to be able to do just this in – at times when there were no such luxuries on offer. Consider!

Stuart Read is a horticulturist, heritage bureaucrat, tour-leader and talk-giver who loves landscapes and gardens. Trained in science, horticulture and landscape architecture, he has gardened and studied gardens in Australasia, Cuba, the Middle East, England and Spain, leading a tour of Spanish gardens in 2010. His writings include Demi-sec: Spanish lessons for Australian Gardens... (2005). He co-authored Interwar Gardens – a guide to the history, conservation and management 1915-1940 (2003), The Oxford Companion to Australian Gardens (2002), and magazines like Australian Garden History and Heritage NSW.