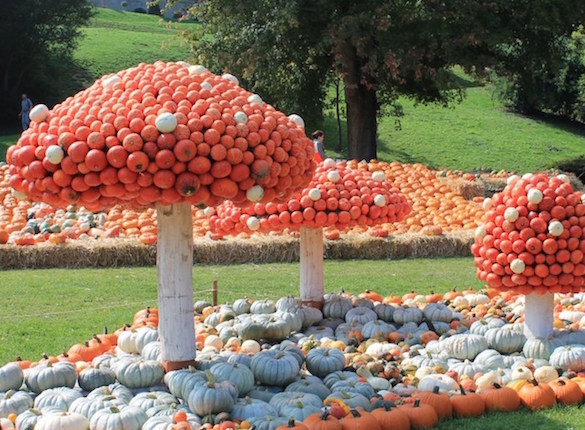 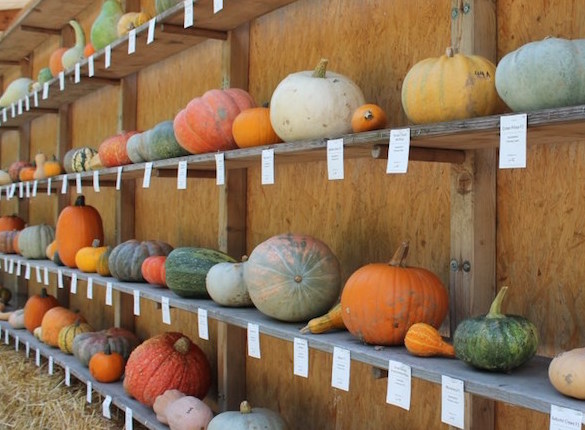 Ludwigsburg: one of the world’s best pumpkin festivals

When I was growing up the only pumpkin we ate was the Ironbark, which required the strength of an iron woman (or man) and a sharp axe to cut it up. Usually it was baked with meat and potatoes, until tender and delicious but sometimes it was boiled then mashed with butter and a dash of nutmeg. The shape and toughness of the Ironbark made it difficult and time consuming to peel so it was often baked with the skin on. The cooked flesh could then be scraped away from the skin but to be honest I liked the nutty taste of the skin and happily devoured it all.

I now use pumpkin in soups, curries and salads but one recipe I like to cook when the weather is cooling down is Cazuela de Ave, a Chilean chicken stew that combines chicken with the native American vegetables of sweet corn, capsicum, potatoes and pumpkin which go together so well.

In shape, the Ironbark resembled a giant slightly flattened, ribbed apple with a creamy blue grey skin. The firm flesh was bright golden orange. Gradually a few other varieties became available on the supermarket shelves – the Butternut, the Japanese (Jap or Kent) and the Jarrahdale, a selection of Queensland Blue which, according to horticultural company Yates, is another name for the Ironbark.

This handful of varieties is but a fraction of the total number that is grown around the world and nothing brought this home more to me than seeing the hundreds of varieties on display at the Ludwigsburg Pumpkin Festival. Touring around Germany with my husband in autumn we literally stumbled upon the Festival. We were searching for somewhere to have lunch between Neckarsulm and Stuttgart and came across the Blooming Baroque gardens of Ludwigsburg Castle (Blühendes Barock Ludwigsburg) which promised a café in a rose garden – what could be better. The gardens were beautiful and lunch was delicious but the pumpkin festival was unique and spectacular and from our point of view totally unexpected and therefore a real bonus.

The Festival has been held annually for the last 15 years and each year the displays are based on a particular theme.

This year (2015) the theme was “Taking Flight” so the displays included models, made of pumpkins, of all things connected to flight. As you might expect this included birds, a butterfly, a fairy, a rocket, a UFO and an aeroplane but there were also a few unlikely subjects such as a flying carpet with passenger on board,

mushrooms (presumably of the magic variety),

a little colony of pumpkin men apparently flying high on alcohol and a spaceship that had nosedived into the turf throwing the hapless pumpkin crew onto the ground.

The most unlikely subject was a grand piano and I’m still puzzling over its connection to flight.

The sheer volume and variety of pumpkins was amazing – so many different shapes, sizes, colours and textures. In addition to the creative displays there was a pumpkin carving demonstration,

and shelves of pumpkin varieties, each labelled with their name and country of origin.

Although pumpkins originated in the Americas they are now bred and grown in nearly every continent. I even spotted two varieties from Australia – the Jarrahdale and the Jarrahdale Large.

There was also a shop selling every sort of merchandise related to pumpkins.

It was here that I got carried away and bought 10€ worth of pumpkin seeds. I was fairly confident that they would be on the Australian Department of Agriculture permitted list of seed imports so I figured it would be fun to buy the seeds as souvenirs and then use the pumpkins to create my own harvest display. Back at the hotel I eventually found the Biosecurity list of permitted seeds on line and confirmed that Pumpkin seeds could be brought into Australia. Great! Imagine my surprise when on arrival back in Australia my seeds were confiscated because only the genus (Cucurbita) and variety names were printed on the seed packets. Without the species name being printed on the packet the officers couldn’t confirm identity so….. into the bin. Oh well… lesson learned.

I know that I could buy a variety of pumpkin seeds in Australia or possibly via the internet but the moment has passed. Sadly I won’t be creating my own harvest display on the front porch, as many Europeans and North Americans do, but at least I have seen what must be one of the best pumpkin festivals in the world.

Linda is a landscape designer and horticulturist living in Fremantle, Western Australia. In 1988 she established Hidcote Landscapes and she still finds starting a new garden design a thrilling prospect. She loves visiting inspiring gardens overseas and exploring the bush closer to home.