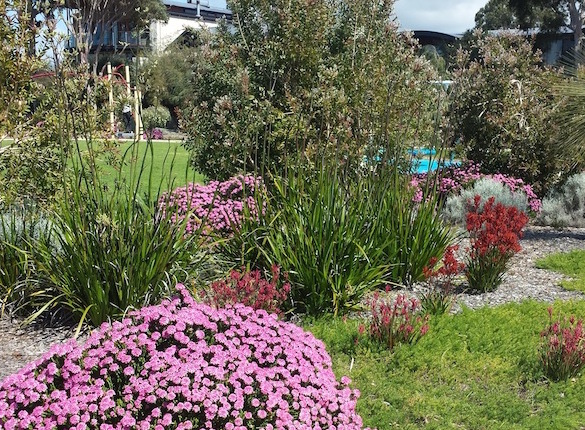 Public parks will save our wildflowers

Australian landscape architects and designers are gradually evolving a distinctively Australian style to their public parks and I recently came across a great example of this in a municipal park in Dunsborough WA, Seymour Park.

The plantings in the park are a fascinating mixture of cultivars derived from species local to the region such as Pimelea ferruginea ‘Magenta Mist’ and Anigozanthos ‘Bush Pearl’. These cultivars provide spectacular feature areas that are complemented by plantings of the indigenous species of the region such as sword grass Lepidosperma and tall kangaroo paw Anigozanthos flavidus and silver bush Leucophyta brownii.

One of the dilemmas of ecotourism to the western Australian wildflower areas is that there may be nothing for people to look at in a bad year. The other problem with wild areas is that taking tourists into them causes irreparable damage in many cases.  Sometimes this is overt through people trampling the very plants they have come to marvel at. In other cases the damage is more insidious such as the introduction of dieback disease caused by the cinnamon fungus Phytophthora cinnamomi.

The creation of regional parks around Australia that can showcase local wildflowers in structured gardens provides the obvious benefit of a predictable display. It can also be done in an environment that can avoid the damage that inevitably occurs when large numbers of people go to wild areas. A further benefit is that infrastructure for tourists such as roads, toilets and accommodation can also be provided with less damage to the local environment.

The overall result achieved by my particular example of Seymour Park in Dunsborough, WA is to showcase the amazing Western Australian flora in a beautifully balanced way. It highlights both the less spectacular wild species as well as the ‘wow factor’ cultivars that are emerging from breeding and selection work within the nursery industry.