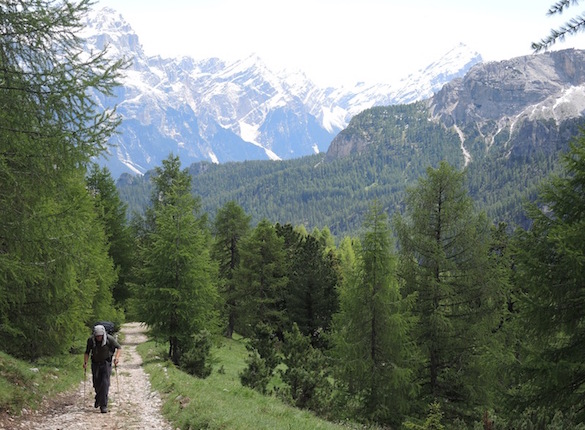 Wildflowers of the Dolomites Part 2

Like any good narrative, the best walks also have a certain rhythm and structure. There’s a gradual introduction, rising to a climax, followed by a resolution. This is obvious when hiking in mountains or high country, where you ascend to a breathtaking lookout at the summit, before descending back to more gentle landscapes. For this reason, hiking purists may shun chairlifts or roads but, for me and Geoff, the climbs in the Dolomites – often several thousand feet after the chairlift, cablecar or gondola! – were too daunting a prospect for us to skip the help. Instead, we traversed valleys on our descent, at the end of our walks (all of which are in Gillian Price’s ‘Shorter Walks in the Dolomites’).

For plant enthusiasts, the narrative of hikes into alpine areas are defined by clear changes in vegetation with altitude, known as altitudinal zonation. This is true around the world, as we experienced in New Zealand, and as Angus Stewart describes in his Snowy Mountains blog post.

Nomenclature was a little confusing, with terminology ranging from montane to forest to alpine and subalpine, with sub-classifications within some categories as well, but basically the vegetation in the different altitude zones varies in species around the world, but not in growth habit.

1. The forest zone
Thus, in the lower regions and valleys we see the forest zone, which in the Alps is 800 metres – 1800 metres depending on latitude and aspect.

In the Dolomites we saw conifers, larch, beech and numerous other deciduous species with a rich diversity of understorey species. Lily of the valley, Solomon’s Seal (two species), Alchemilla, Euphorbia, Geranium, Aquilegia, Thalictrum, Filipendula, Campanula, Anemone, Valeriana and genera completely new to me such as Maiathemum and Pyrola thrived in areas of quite dense shade.

Gallery of wildflowers in the forest zone of the Dolomites

A similarly rich diversity of wildflowers could be found in small clearings in the forests, or open areas along the valley floors. I rarely took any picture without the scattering of the colours of other flowers – often many other flowers! – in the background. Exhilarating! Once again, I recognised plants like Dianthus, Myosotis, Rosa, Veronica and Plantago genera, but Polygonum viviperum, Horminum, Pimpinella, the bold False Hellebore (Veratrum album ssp lobelianum) and the two colour forms of Polygala chamaebuxus were ones I had fun identifying online.

Gallery of plants of the forest clearings of the Dolomites

Another plant community in this zone was the glorious herb meadow, filled with flowers. I could have spent a full day photographing the numerous plants in just ten square metres – it was astonishing see how such an ecosystem, adapted to grazing by domestic stock, is enriched and diversified, when the effect is so different in Australia (although the recent adoption of small field techniques, where cattle graze a small area intensively but only for a short time before being moved to a new area, apparently improves pasture health and diversity here as well). Salvia, Campanula, orchids, Silene, clover, daisies, Trollius, Myosotis, Ranunculus, and Cytisus were just a tiny fraction of the plants in the meadows.

The subalpine zone (1400 – 2500m) is characterised by shrubs: in the Dolomites Salix, junipers, daphnes, Rhododendron and Erica) and stunted trees (usually conifers). This often spectacular stunting and twisting of trees is due to the extremes of climate, a phenomenon known as Krummholz formation. Even the different kinds of Krummholz trees are named – in one picture, you can see a flag, or banner tree in the foreground, where the foliage and branches have been killed on the windward side.

The tree line, or boundary between the subalpine and alpine environments, was often very sharply demarcated and easy to see. I always loved this part of our hikes, because of the dramatic way the views opened up and the wildflowers changed.

The alpine zone (2100 metres – 3200 metres) is the area above the natural tree line and was for me the most breathtaking environment because everything was so very different to anything I’ve seen before. In the lower regions, there were juniper and shrubland communities similar to that in the subalpine zone, but also other flowers, notably brilliant blue gentians (Gentiana verna, Gentiana acaulis), as well as Leucanthemopsis and Pinguicula.

Gallery of wildflowers of the high alpine region of the Dolomites

Riparian, or wetland, communities ranged from rocky streams to boggy marshes. It was exciting to see the many forms of Geum rivale, with subtle differences in flower colour, shape and size, as well as several Carex, Caltha and Ranunculus species.

Perhaps most amazing of all were the rock communities, both on stable rock, and on rock debris or scree.

Gallery of riparian zone wildflowers of the Dolomites

The plants growing on stable rock were often tiny, clinging to the sides of sheltered boulders, or soaking up the warmth on the southern face. There would be an entire garden on one small boulder – not just herbaceous plants and small shrubs, but also lichens and mosses in a fantastic array of forms. The more spectacular flowers were Campanula cochlearifolia clinging to sheltered vertical walls at lower elevations, while Achillea and thymes grew on sunnier aspects. Dryas and Globularia populated rocky ground as well as outcrops in the forest and subalpine regions; Silene, Primula, Draba and Rhodothamnus grew in and out of cracks in boulders higher up, as did the aptly named rock rose (Helianthemum). I saw numerous variations of minute cushion Saxifraga but none, alas, in flower.

Gallery of plants growing in and among rocks in the Dolomites

Tussilago and Petasites were adventitious species on boggy unstable areas, but the most impressive colonisers were the plants that established on the precarious shifting scree slopes without a grain of soil or organic matter in sight. These plants included the rare yellow Rhaetian poppy (Papaver alpinum ssp. rhaeticum), which I’d read about. For days I’d scanned every scree slope and had almost given up when there was the characteristic blaze of gold directly ahead – absolutely thrilling! Other exciting finds amongst the scree included Biscutella, Minuartia and the clashingly vivid purple and orange Linaria alpina.

Gallery of plants of the scree slopes of the Dolomites

Geoff and I spent just two weeks in the Dolomites, and we hiked about every second day, so all the plants in this blog and the previous one, we saw in just nine days. It was an amazing experience – and not only because of the plants. At one rifugia on the Civetta Ridge, we got talking with a grizzled traveller who had climbed mountains in his younger days. Rock climbing was beyond him now, but he told us that of all the mountains he’d tramped – The Himalayas, Andes, Northern Alps and half a dozen more – the Dolomites was his favourite. “The scenery changes every day – no, every hour – and there’s something new around every bend in the track,” he said. So true.

Visit the Dolomites – in late June through July if you’re a plant enthusiast. In just a few weeks, you’ll gather a lifetime of plant memories.

Horticultural journalist, photographer, contributor to many garden magazines, and author of 'Gardening on a Shoestring'. Adelaide Hills, South Australia